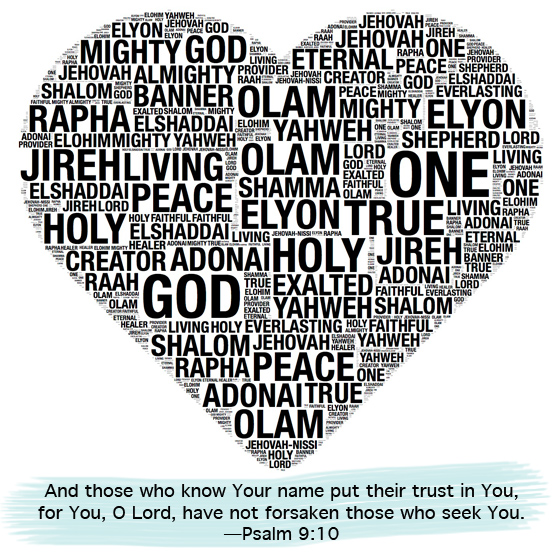 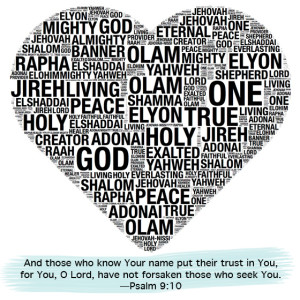 Our Name of God this Week:  Jehovah-Nissi —The Lord My Banner

Jehovah — The Existing One or Lord. The chief meaning of Jehovah is derived from the Hebrew word “havah” meaning “to be” or “to exist.” It also suggests “to become” or specifically “to become known” — this name denotes our God as the One who reveals Himself unceasingly.

Nes (from which Nissi is derived) — a banner; a pole with an insignia attached; something lifted up to be seen far off; a standard, a signal.

We first encounter the name of God, Jehovah Nissi in the book of Exodus. The people find themselves fighting a great enemy, the Amalekites —an enemy that just keeps coming.

Moses, recognizing that the Lord was Israel’s banner under which they defeated the Amalekites, builds an altar named Jehovah-Nissi (the Lord our Banner). In battle opposing nations would fly their own flag on a pole at each of their respective front lines. This was to give their soldiers a feeling of hope and a focal point. This is what God is to us: a banner of encouragement to give us hope and a focal point. His Word is our standard.

“In the Old Testament a banner generally meant a rallying point or standard which drew people together for some common action or for the communication of important information. This usually happened on a high or conspicuous place within the community.  There, a signal pole, sometimes with an ensign attached could be raised as a point of focus or object of hope.” (Theological Wordbook of the Old Testament)

Walking in His Name —Jehovah-Nissi:

Many scholars see Amalek as a picture/type representing the enemies that God’s people face —those being the flesh, the world and the devil. (Galatians 5:16, John 16:33, Galatians 6:14, 1 Peter 5:8-10). But like the Israelites when we face an “enemy” we are not called to fight in our own strength and power. We are to trust and know that the Lord will fight for us. We are to rely upon Him. We are to look to Jesus —our banner —Jehovah Nissi!

It will come about in that day, that the nations will resort to the root of Jesse, who will stand as a signal (banner). —Isaiah 11:10 (the root of Jesse is a reference to Christ)

No, in all these things we are more than conquerors through him who loved us. For I am sure that neither death nor life, nor angels nor rulers, nor things present nor things to come, nor powers, nor height nor depth, nor anything else in all creation, will be able to separate us from the love of God in Christ Jesus our Lord. —Romans 8:37-39

You have set up a banner for those who fear you, that they may flee to it from the bow. Selah. —Psalm 60:4

Some trust in chariots and some in horses, but we trust in the name of the Lord our God. They collapse and fall, but we rise and stand upright. —Psalm 20:7-8

He brought me to the banqueting house, and His banner over me was love. —Song of Songs 2:4

A banner is a wonderful picture of God’s protection and deliverance. His banner over us symbolizes His presence, His power and His provision. God as our banner is a symbol and reminder that we need to depend on God for victory in our battles and not our own strength and effort.

It’s easy to become discouraged when we look to the world and the daily suffering and discord we observe all around us. It’s easy to become discouraged and feel defeated in our own lives at times. But I love what Hebrews teaches us. The book of Hebrews begins with the author reminding us of how God speaks to us. He then goes on to exclaim and expound about the greatness and superiority of Jesus.  One day Jesus will return and rule and reign over all!  He is greater than anything we are tempted to trust in this life. I really love Hebrews 2:8-9 has to say,

Now in putting everything in subjection to him, he left nothing outside his control. At present, we do not yet see everything in subjection to him. But we see him who for a little while was made lower than the angels, namely Jesus, crowned with glory and honor because of the suffering of death, so that by the grace of God he might taste death for everyone. —Hebrews 2:8-9

We see Jesus! His banner over me is love. He is my victory, my banner in the midst of the battles of life. Look to Him!

When in the battle rages and the armies are advancing in our lives, we need a battle plan. The Lord God is Jehovah-Nissi —Our Banner—we look to Him!  And then we act:

This week for your homework you’ll be reading through 2 Chronicles 20:1-34 and noting what you learn from King Jehoshaphat when he faced the great army that was advancing against him.

Where in your life do you need to do battle? Remember, redirect, recognize, rehearse and recite!