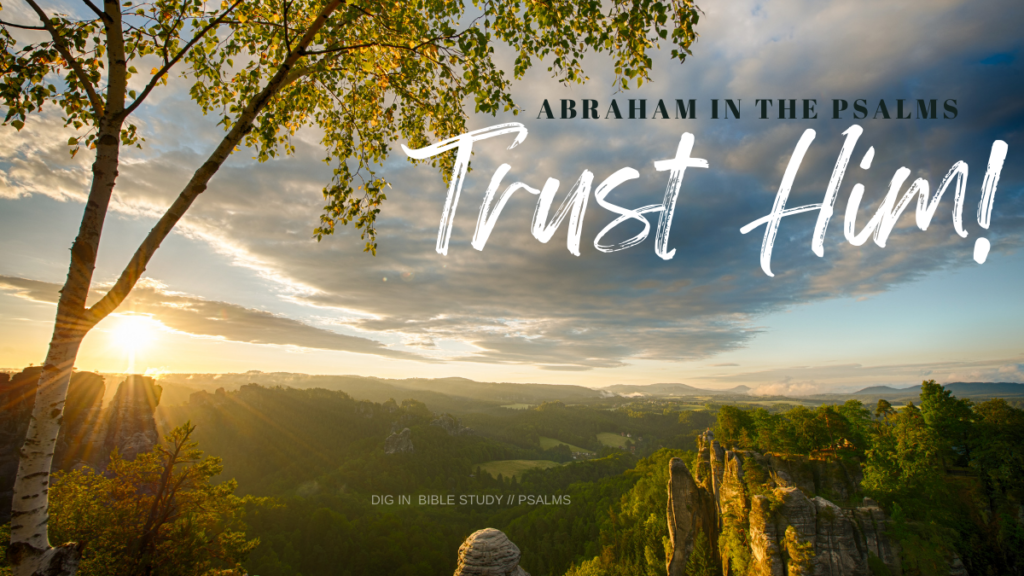 We continue our Psalms study by exploring the major events of the story of the Bible as found in the Psalms. Last week, we looked at the historical motif of the creation event found in the psalms. This week, we look at a major turning point in the story of the Bible as told in the story of Abraham. Abraham is only mentioned specifically twice in the psalms (Psalms 47 and 105) but we find as we read through the psalms that Abraham is on the minds of psalmists. At the heart of so many of the psalms is the remembering and understanding that God keeps his promises.

Let’s go back to Genesis 12 where we first encounter Abraham in the Bible story. Take a moment to read Genesis 12 and note what God promises Abraham, or Abram as he is known in the part of the story.

Genesis 12 is the unfolding of God’s promise made in Genesis 3:15 when he promised to reverse the effects of the fall and sin in the life of humanity. Redemption is promised in Genesis 3:15 using metaphorical language and no further explanation or details. In Genesis 12:1-3, God begins to give us the details of his plan of redemption and his intention to use one family line to bring about this glorious plan of redemption. Further details will be given as the story progresses from Genesis 12 to the end of the Old Testament story —but it begins with one man, Abraham.

In Genesis 12, God makes a covenant with Abram (he will later become Abraham). This covenant is repeated in Genesis 15 and 17 and again in Genesis 26 and 28 to Abraham’s son and grandson, Issac and Jacob. God promises to make Abraham a great nation and that he will be given a land in which to live and that he will be a blessing to all the nations. There are three key elements that make up this covenant: the descendants, the land,  and the worldwide blessing.

These key elements of the covenant are significant in the Psalms. When the land is mentioned in the Psalms is it usually referred to as the Promised Land or the inheritance. God also promises a worldwide blessing through Abraham’s descendants. From him will come nations, and kings that rule the world (Genesis 17:6). We find this worldwide blessing explicit in Psalm 47. God also promises to curse those who curse Abraham. To curse Abraham and his future descendants is to be an enemy of God—who has chosen and blessed Abraham’s line and through whom He will bring about the redemption of His people. So when we read in the psalms of those who are cursed it has its roots in the fact that they are hostile in their hearts toward God.

Take a moment to read Psalm 47 and note the elements of the covenant of Abraham you find.

Later in the Old Testament, we become familiar with one of Abraham’s descendants, King David, who is credited with writing many of the psalms. God reiterates the covenant with Abraham to David and adds that there will always be a descendent of Abraham who sits on the throne. Now if you’ve read the Old Testament and are familiar with the story of the Bible, you’re probably thinking that this doesn’t play out as the descendants of Abraham in the 12 tribes of Israel are eventually conquered and taken captive by warring nations of Assyria, Babylonia and eventually Persia. And even when the Israelites return from exile, back into the Promised Land, they do not have a king of their own ruling.

At the heart of this covenant of blessings is the command for God’s people to keep God’s precepts and obey his laws, and therefore experience His blessings. God also clearly promises consequences for those who fail to do so. This command to obey is not rooted in God wanting a people who will obey a list of “dos and dont’s” but rather a people who would love the Lord God, seek him, trust him, and desire to walk in His ways. The heart of the covenant is always about relationship and we find that emphasized in God’s covenant name given to his people, Yahweh, and in a repeated phrase found through the Old Testament, “I will be your God and you will be my people.” Psalms 105 and 106 are great examples of this covenant of Abraham. It’s interesting that when we get to the New Testament, in Matthew we read of the arrival of Immanuel, the One promised in Isaiah 7. Immanuel reflects God’s covenant name and promise—God with us!

So how does this apply to us today? Although the promise given to Abraham of land had a specific location and boundaries, we find that the final worldwide rule and blessing is not limited by time and space. The promise to Abraham was a shadow of a greater reality to come. In Romans 4:13, Paul writes that God promised Abraham and his offspring would be the heir of the world. If you read Matthew 1, the genealogy of Christ, you find that He is the descendant of Abraham who the New Testament confirms is the heir, the King, who will rule the world.

Today the descendants of Abraham are those who have placed their trust and surrendered to the Lordship of Jesus Christ (Galatians 3:10-14, Romans 4). True repentance that bears fruit in a changed life is the mark of being a spiritual child of Abraham. Abraham was a man who trusted God and lived by faith. Even though there were moments of doubting and situations in which Abraham initially does not act out of faith in God, the New Testament affirms Abraham as a man of faith who believed and trusted God. “Abraham believed God, and it was counted to him as righteousness” (Romans 4:3).

In Christ, the promise of redemption finds fulfillment. Jesus ushers in the new covenant with that promise of an heir, a king who will rule and reign forever and one day will bring about the new heavens and new earth (land) in which those who have placed their trust in Him will dwell with God forever. 1 Peter 1:4 confirms that we have an inheritance being kept for us in heaven until Christ returns, one that will never perish, spoil or fade.

As you read the psalms keep the references to Abraham and God’s covenant with him in mind. Keep in mind God’s promise that He will be your God. He is always with you. He has a beautiful future promised to you, not only in blessings of His goodness in the here and now, but one day in the new creation—the new heavens and new earth, where all will be restored and made new. Where he will dwell with us forever. Will you trust Him?

Take some time this week to read through Psalms 47, 105, and 106. Use the Dig In Psalms Study Guide as you read through the Psalms. Make note of the references to Abraham and the covenant God made with him and his descendants.

For more helpful tips on studying the Bible, download the Dig In Bible Study Method Guide.